Bridging the History Between Old and New: The Holden Beach Bridge

A glance back in history often results in a deeper appreciation for modern times. To fully understand and value today’s Holden Beach Bridge, it’s helpful to journey through history a bit to the beginning days.

The Early Bridges and Ferries

Holden Beach, originally settled before the American Revolution, extends east to west, from Lockwood’s Folly Inlet to the Shallotte Inlet. The island was initially purchased back in 1756 after a land grant was issued from British Royal Governor Arthur Dobbs, and it was often used for fishing and cattle grazing. But during the Civil War, the area between the island and Lockwood’s Folly Inlet actually became the final resting ground - or water - for several blockade runners and ships around 1864. In those early days, folks would cross the “creek” at low tide, often by mules and wagons or on a foot log at the location where the ferry road is today. In 1925, a log bridge was constructed to reach the island until the Intracoastal Waterway (ICW) was dug in the early 1930s by the U.S. Army Corps of Engineers, completely separating the island from the mainland.

Locals negotiated with the State of North Carolina to reconnect Holden Beach with a bridge or ferry, so the State began the operation of a one-car public ferry to reach the island in 1934 just before the first land lots were sold on the island the next year. This first wooden ferry was operated by manpower. According to local lore, the men would fashion a hickory “jack stick” to pull the ferry along a metal cable strung across the ICW. The outboard motor was invented by 1940, and the State attached one of these to the east side of the ferry. However, the outboard motor was not reliable in those days. A car motor, which was much more dependable, was later placed in a frame on the same side of the ferry. 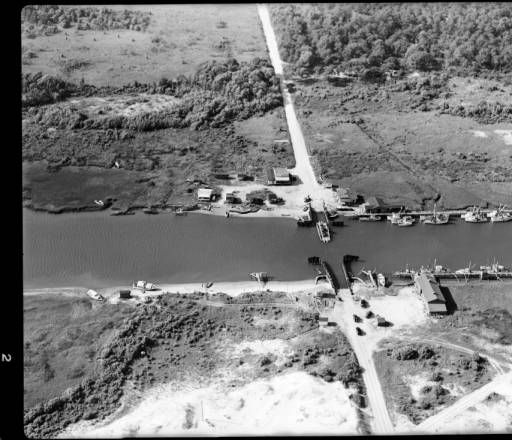 As early as the 1940s, beach cottages and homes were under construction, and by 1945, a two-car cable ferry provided access for the first vacationers to the southern Brunswick island. Old-timers and their children and grandchildren recall carpentry, dredging, fishing, and shrimping activities flanking the ferry landing, which was the busiest spot on Holden Beach during those days. Evidently, half the folks were waiting for the tide to roll in, while the others were waiting for it to go out.

As the resort area of Holden Beach grew, so did the traffic crossing the waterway. The ferry operators were struggling to take care of the summer traffic, especially on weekends and holidays. Photographs from the time document the line of cars being backed up from the ferry, over the hill to Ocean Boulevard, and then down the Boulevard west one quarter of a mile. That sandy road over the high dune to the ferry proved to be quite a challenge some days, when blowing sand often made the road a single lane instead of two. Approaching cars actually had to honk their horns as a warning. Shacks starting popping up around the ferry site along the waterway and were often rented by visiting fishermen. Fish and shrimp houses gradually appeared, too, on both sides of the ferry and on the island. As the island was sprinkled with more and more beach cottages, the line of cars awaiting the ferry increased, especially on Sundays as weekenders were returning home to work. 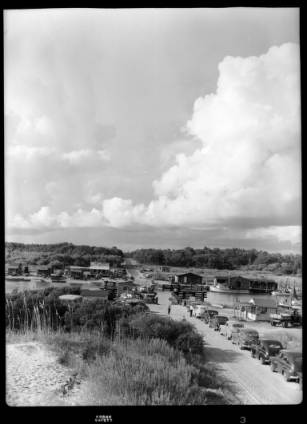 By February of 1954, the island had grown to about 300 homes and had its own turnbridge — or turn-table bridge — which had been completed the year prior. The turnbridge was located around one half mile west of Ferry Road on Jordan Boulevard and the Holden Beach Causeway. Despite Hurricane Hazel’s ferocious arrival on Oct. 15, 1954, which demolished hundreds of homes and structures, the island continued to grow and was incorporated in 1969. For 32 years, that iconic bridge provided easier and safer access to the island and was used for evacuations as needed. But the increasing road and boat traffic starting in the early 1980s was the cause for many road delays and a few frustrated locals, workers and vacationers!

The Bridge We Know Today

It was a big deal to the communities on both sides of the waterway when, in June of 1984, construction started on the new high-rise steel and concrete bridge. The new bridge was just west of the old bridge. Approximately $4.1 million in federal and state funds were allocated to provide better access to more than 1900 island homes at that time. The 65.5 feet of clearance allows waterway traffic passage without interrupting vehicular traffic above. Many folks marvel at the height and view of the curved bridge. However, to accomplish the clearance while avoiding a crazy steep slope, that one-of-a-kind curvature was the solution! 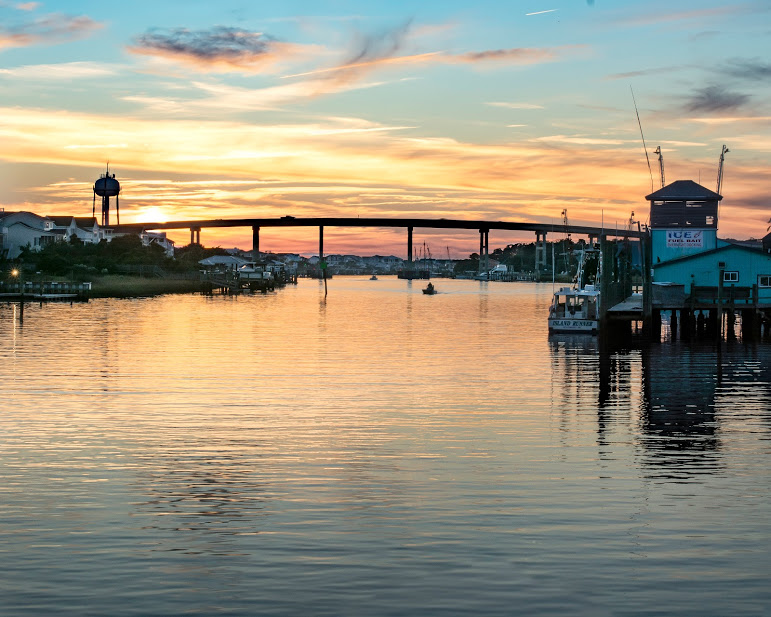 On June 6, 1986, two years after construction began on the new bridge, local bridgetender Ruby Bellamy opened and closed that turn-table bridge for the last time. History was made as the new high-rise was dedicated with a short grand opening ceremony on May 13, 1986 by the Town of Holden Beach. (Fun Fact: The Hobbs family actually had to wait for the ceremony to conclude to cross the bridge en route to the hospital with a laboring mama — and the healthy baby boy arrived the next morning!)Today, Holden Beach continues to be appreciated for its limited development and pristine beaches. Recognitions include one of “38 Overall Best American Beaches” in National Geographic Traveler Magazine, “Top Ten Places to Buy a Second Home” in the Yahoo! Spring Vacation Guide, and “One of America’s Top 10 Beaches” and the “No. 1 Family Beach" in American Profile.

Why all the accolades? Because this barrier island community is the Goldilocks of the Brunswick Islands, with just the right combo of activities, amenities and space. Its 3.4 square mile area and eight-mile stretch has plenty of sand to go around with around 500 year-round residents and 2400 homes. But many have discovered that the allure of Holden Beach waterfront is undeniable… And what a great introduction to the island from atop the one-of-a-kind vantage point of the Holden Beach Bridge!