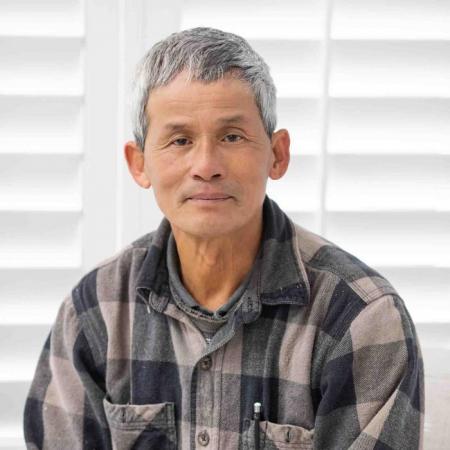 An’s journey to the Hobbs family was a long and circuitous one, which actually began in Vietnam, where he was born, raised, and educated. After the war in 1975, his father was imprisoned as a member of the South army, very few resources were available to his family, and An was called up for the army. He instead stayed in South Cambodia for several years and then escaped to Hong Kong. Suffice it to say that the voyage there and then later to the United States was arduous and sprinkled with great loss and memories that have traveled with him these many years in his heart and mind’s eye.

An’s story continued with the right people being aligned at the right time in his path in Atlanta, Georgia; in Baton Rouge, Louisiana; a brief stint in Chicago; back to Baton Rouge; then Whiteville, N.C., of all places. Soon, An’s gift of woodworking was developed and discovered (he was even featured on Good Morning America), and, after running a woodworking shop, An worked at Dupont in Leland, N.C. It was there through an extended Hobbs family member where An heard that help was needed building houses in Holden Beach. And, well, the rest is history. An became a full-time member of the Hobbs team in 1999 and is the field maintenance guru still to this day – from new projects to repairs. And the cool thing? After all these years, An still believes that he can never learn enough, that every day is a little different…. and that it’s is all about getting better.

Best Part of Hobbs Realty: Jimmy and all the good people treat me so good and as part of the family….they trust me.

After Hours: Working around the house, side jobs, and spending time with my wife, two children, and grandchildren

Pursuits: I want to one day return home to visit my large family and I want to take my youngest child back to my homeland to see where her family came from.

Something Others May Not Know: Whatever time I have left is to care for my children and grandchildren.

Inspired By: That day in the ocean after the bad storm when traveling to the U.S……I know the prayer is why I survived and God gave me a second chance. I knew my life had a purpose.